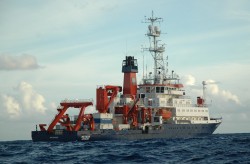 Submarine massive sulfide deposits (SMS) are often seen as a possible future contribution to a secure metal supply for global human needs. Resource estimates, however, are lacking several of the fundamental answers that need to be addressed. There are currently several orders of magnitude between resources estimates based on observations at the seafloor and those based on metal fluxes. We need to understand how much of the metal that is released by high-temperature fluid convection over a given length of a ridge axis and over a specific geological time frame is actually deposited as massive sulfides. Additionally, exploration is currently mainly targeting young, active deposits due to the ease of identifying chemical and physical tracers of hydrothermal activity in the water column.

It is assumed, however, that 10 times more metal is associated with inactive massive sulfide deposits that have gone through a complete hydrothermal cycle and therefore likely contain more metal than active deposits.
The inactive deposits may also occur away from the present day ridge axis, but until recently the technology to identify those deposits was lacking thereby underestimating the global resource potential.
Within the framework of the EU-FP7 project “Blue Mining” some of these limitations are addressed. Investigations will be targeted at the TAG segment (26°N, Mid-Atlantic Ridge) where one active and a few inactive massive sulfide deposits are known to occur, but the majority of the segment has never been investigated in detail.

During cruise M127 on the German research vessel RV METEOR research in work packages 1 and 2 of the “Blue Mining” project will be conducted. Technologies used include detailed high-resolution bathymetric mapping by an autonomous underwater vehicle (AUV) equipped with a variety of sensors for the detection of inactive SMS deposits (WP1) combined with 2D- and 3D-seismic observations (WP2) and the ship-board investigation of surface sediments (WP1). This will allow us, for the first time, to address the segment-scale distribution of metals over time. Additionally, equipment for electromagnetic investigations that are to be performed during the follow-up cruise on the British RV James Cook in July/August 2016 will be deployed (WP2).