Here we are for the third post on the Blue Mining blog! Today is Friday 3rd of June, 10th day since Barbados. Time is flying, the horizon stays the same – blue ocean, blue sky – , days are busy and we lost the count of them. Fortunately we always know when Friday is, delicious fish on the menu!

Back to science, we have been at the working area since Monday evening. Since then, we have deployed the 5 OBEM stations and the AUV Abyss dived a couple of times to undertake high-resolution multibeam bathymetric mapping. Two nights ago, we started the first gravity coring. 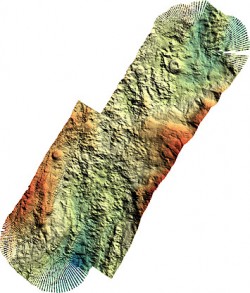 On our last post, we detailed the role of the multibeam bathymetry mapping, which has temporarily stopped mapping on a segment scale of our study area with the ship-based system (Kongsberg EM122).  This is to allow the other working groups to get their share of ships time. The AUV multibeam system installed on the AUV (RESON 7125) is now being used to acquire bathymetric data at a higher resolution (< 2 Meter).  A minimum of 10 AUV dives is planned for this task and is distributed throughout the cruise length. Today was the third dive. The first mission was devoted to the main area of known mineralization and includes the active TAG mound as well as the inactive mounds that are the major target for the seagoing activities in work package 1 and 2 of ‘Blue Mining’. At the same time, the AUV team also provided us with information about the acoustic backscattering and the texture shading of the seafloor, important for localizing gravity corer stations. The AUV is also equipped with a series of chemical and physical sensors including, among others, the self-potential sensor, which was developed in ‘Blue Mining’ (Task 1.1; Sven Petersen), a magnetometer, an Eh sensor, and a temperature sensor. The sensors have all recorded a strong anomaly located above the active hydrothermal mound! Post-dive processing will show if the various sensors pick up anomalies related to the inactive deposits.

Do you know what the backscatter data is?  The backscatter is the intensity of acoustic energy (that has been sent by the multibeam echo sounding system) received back by the sonar on-board after the interaction with the seafloor. Every type of seafloor reflects the energy in a different proportion due to their physical properties (acoustic impedance, roughness, and volume inhomogeneity). A soft sediment cover will return a weaker signal whereas a hard rock cover such as lava flows will return a stronger signal. Also, extinct sulphides (eSMS) may show a different return signal when exposed at the seafloor. In that respect the backscatter data helps us to interpret the nature of the seafloor. This data could be used as a preliminary exploration tool for eSMS deposits and is helping with the locations of the upcoming gravity coring (as we definitely want to avoid the hard rock and find the perfect spots of thick sediment cover). 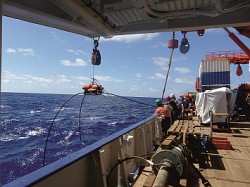 OBEM deployment on a cable. Note the long antennas (photo I. Stobbs).

In between AUV dives, 5 passive ocean bottom electromagnetic stations (OBEM, developed at GEOMAR) have been deployed on the seafloor along a NW-SE profile. Every deployment takes approximately 3 hours with a cable speed of 1m/s to 3600 m of water depth and the preparation before hand. The long deploying time is related to the need of a precise location for the instruments on the seafloor. We cannot simply drop them over the side and let them sink, as they will drift with the ocean currents. Instead, we attach an acoustic beacon to the cable and monitor its relative position to the vessel (for which we know the position – thanks to GPS). For the next couple of months, they will passively acquire information regarding the electromagnetic field at the seafloor and especially around the known inactive sulphide deposits. This information concerns the Task 1.2 (Tim Minshull) of the Work Package 1 included in the following RV James Cook cruise led by Bramley Murton from the National Oceanography Centre of Southampton. The OBEM stations will also be used for active electromagnetic surveys during that cruise as part of Task 2.2 (Marion Jegen) in work package 2. More detailed explanation of the OBEM surveys will be posted on this blog during that next cruise. So keep following us! Next post, we will talk to you about the gravity coring and the OBS stations deployment!