Welcome back to the Blue Mining blog series. We’ve now successfully completed the transit leg of our journey! We have been able to use these last couple of days of transit to complete test dives for both the Abyss AUV (autonomous underwater vehicle) and the HyBIS platform, and also deployed an ‘Argo’ buoy for the international ARGO network that monitors oceanographic data from drifting buoys all over the globe. 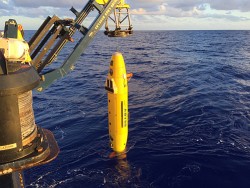 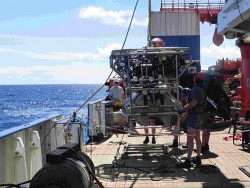 The testing identified a few initial hiccups, as is commonly the case for the first stages of testing, however the problems have been fixed and we are eagerly anticipating the start of the working science days.
However, we have already been collecting data on our transit! The meteorology team have multiple pieces of equipment set up across the ship and have been recording weather conditions (which have been nothing but sun and blue skies since leaving Barbados!)

An Acoustic Doppler Current Profiler (ADCP), which measures ocean currents and direction in the upper part of the water column, and the ship’s on-board multibeam echosounder have been in operation since we left the exclusive economic zone of Barbados. The latter records the bathymetry, e.g. the morphology of the ocean, under the ship in order to help understand geological processes in the central Atlantic.

Essentially the multibeam echosounder system uses the traveltime of a sound-‘ping’ that is emitted from the ship, travels to the seafloor through the water column and back to the ship’s receiver. Knowing the velocity of sound in seawater we (actually the computer) calculates the water depth for each ping emitted. The system on-board the RV Meteor can detect sound from up to 600 beams per ping in a wide arc (as shown in the diagram below/above/wherever it is put on the final page), therefore we can map/cover an area the width of approximately 3 times the water depth (i.e. for a water depth of ~3km, it can cover an area of ~18km). The data needs to be processed in order to create a bathymetric map of the seafloor. If you would like to learn more about the geological mapping working group aboard the Meteor, visit their personal blog regarding this cruise, which can be found at (www.oceanblogs.org/mappingtheoceanfloor).
This multibeam system forms part of the set of equipment used within the geological mapping work group on the vessel and will be combined with data from a similar system on the AUV Abyss to produce bathymetric maps of the TAG hydrothermal zone at 26°N on the Mid-Atlantic Ridge with a resolution (pixel size) as low as a few meters that will aid the sampling of the other working groups on board, help interpret the data from other sensors used in work package 1, and will identify areas suitable for drilling during the next ‘Blue Mining’ cruise on the RV James Cook. For the next 24 days the aim is to be conducting various forms of data collection and sampling, 24 hours a day – 7 days a week, to make the most of our time out here on the central Atlantic.

If you stay tuned to this blog we will keep you updated with our progress and will keep you informed about the variety of research being conducted on board.
So until next time, or as the Germans say: