Time for another blog! We are in the second half of this exciting cruise and so far we have been able to present you with a lot of information about what we have been doing to date. The AUV has been regularly bringing back fantastic high-resolution bathymetric data, magnetic data and self-potential data. After several (literal) sleepless nights of gravity coring we have obtained a number of good length cores of sediments as detailed in the last post, with further coring scheduled over the rest of the working time during the cruise. 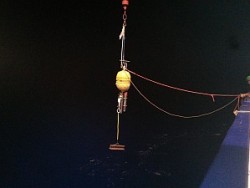 Sporadically throughout this cruise we have been undertaking seismic surveys across the TAG hydrothermal field. Within earlier blog posts we detailed the deployment of ocean bottom seismic (OBS) sensors using the platform HyBIS, while some instruments have been deployed from sea surface. At the moment a total of 20 OBS, and 5 ocean bottom hydrophone (OBH), sensors are sitting on and around the two target mounds (Shinkai Mound and Southern Mound).

So, what information can we get from seismic data?
Earth has a cool and therefore mechanically strong outermost shell called the lithosphere (from the Greek lithos for “rock” and spharia for “sphere”). It comprises the crust, which includes the rocks exposed at the surface of the Earth, and the uppermost mantle. Knowledge of the structure, composition, and secular evolution of the lithosphere is primordial for understanding the geological evolution of the Earth since its formation. Investigating the Earth’s lithosphere requires using indirect methods based on geophysical properties, which allow to study the physical properties (velocity, density, magnetic field, etc.). Determined by geophysical field experiments they can be compared to laboratory measurements in order to place constraints on the composition of the Earth’s lithosphere.

The seismic methods are widely recognized as one of the more powerful tools for the investigation of the physical properties of the Earth’s interior. In work package 2 of the Blue Mining project we are using controlled-source seismology (also called “active source seismology”). The particular advantage of the controlled-source seismology is that it uses man-made seismic sources (air-guns) for which the origin time and location of the source signals are precisely known. Offshore seismic methods use air-guns as sources. They generate an air bubble in regular intervals that causes sound energy to travel through the water column, the seafloor, and the crustal layers below the seabed. Within Blue Mining we apply vertical reflection profiles and refraction/wide-angle reflections profiles (see schema below). 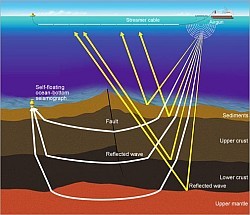 In vertical seismic reflection profiles the seismic waves (sound) generated by the source travel through the water column and penetrate the seafloor. Whenever they hit a layer of rocks with different speed of sound or different density they are reflected back to a streamer at the sea surface. The streamer consists of a row of hydrophones connected to each other. It is towed behind the vessel at 2-3 m below the sea level and records the arrival of the reflected sound energy. Recording the time the seismic waves need to arrive at the streamer provides a good image of the geometry of the geologic interfaces. However the shortness of our streamer (300 m long only) does not allow getting a good control on the seismic velocities, which discriminate different types of rock. For this method we apply refraction/wide-angle reflection observations, which use a different geometry. The source signal is recorded at distances of several kilometers by an array of seismic stations. Those individual receivers, Oceanic Bottom Seismometers (OBS) or Hydrophones (OBH), are deployed directly on the seafloor. The record contains seismic waves that are reflected with wide incidence angle (kilometer wide offsets), as well as sound energy that travels within geological horizons (refracted sound energy). By combining both methods a crustal model can be derived providing information not only on the geometry of the geologic interfaces, but also on the seismic velocity of each interface.

As we are interested in the shallow structure and composition of the mounds, the OBS need to be deployed very close to each other on the mounds. To ensure save anchoring and gentle slopes for landing these instruments have been deployed by HYBIS.