Today, Thursday the 7th of July 2016, we arrived at the capital of the Azores, Ponta Delgada. We are stopping here to pick up the remainder of our EU colleagues for the Blue Mining cruises JC138.

The Blue Mining project (#Bluemining) is funded by the European Union, with a net cost of 15 million euro. Our multi-million pound expedition, RRS James Cook cruise JC138, funded and run by the National Oceanography Centre at Southampton, has a number of primary goals: to test new robotic technologies for the exploration and assessment of seafloor mineral deposits, and to understand the fate of those deposits after they have formed.

Hydrothermal vents are both spectacular and provide a habitat for unique chemosynthetic fauna. The superheated metal-rich fluid venting from the seafloor also produces millions of tons of copper, zinc and gold-rich mineral deposits. However, once the venting has stopped, the vent fauna moves on, and the mineral deposit gets buried by sediment and starts to rust away. Our task is to learn how to find these dead hydrothermal deposits and see what has happened to their metals during and after the cold seawater has reacted with them. 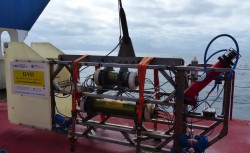 DASI electromagnetic transmitter on the deck of the RRS James Cook

To that end we have developed robotic machines and new technologies to discover and drill beneath the seafloor for these mineral deposits. These include an electromagnetic imaging system called DASI which transmits high electrical currents though the seafloor.

Our German partners from the marine institute ‘GEOMAR’ are bringing another type of electromagnetic imaging system called Sputnik to create an electrical conductivity, 3D image of the mineral deposit beneath the seabed.