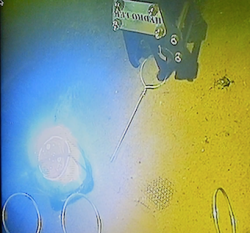 HyBIS deploys beacon nest to the living trace fossil ‘Palaeodictyon’. This geometric pattern is left by creatures unknown to mankind that have been around, unchanged, for over 600 million year. (photo B. J. Murton @bramatsea)‬

We are now well into the Blue Mining cruise JC138 ‪#Bluemining‬‬‬‬‪) and we are all very busy. The HyBIS ROV managed to explore our first target site, a 200m diameter 50m high mound of sulphide ore. The hydrothermal activity is long dead and the mound is covered in white chalky grey sediment. On deploying one of our flashing beacons, to mark a drilling site, we noticed a geometric pattern of small holes on the seafloor. This is the mark left by a creature as yet unknown to Mankind. Its trace has been found in rocks over 600 million years old and is known as Palaeodictyon. Other than there is surprisingly little else living here and throughout the dive we have only seen two sea slugs (Holothorians) and a single lone anemone. Perhaps the weathered ore body is toxic to most benthic fauna? Certainly, as it rusts, the sediment is likely to have very little oxygen in it, as well as a high concentration of dissolved metals. Our analyses will tell us if this is the case.‬‬‬

RD2 is lowered into the inky black sea during the night for its three and a half kilometer journey to the seafloor (photo B. J. Murton @bramatsea)‬

After six hours of exploration, we recover HyBIS and deploy the deep-sea drilling rig, RD2. The rig weighs over 7 tonnes and is lowered to the seafloor, 3500m below us. Our landing site is very small, only 10x10m square and it takes an hour ore more to locate the beacon.

After landing, we found the seabed was too soft to level the drill to within its 10° limit and, frustratingly, we had to return to the surface. On its way back, the winch overheated and a 130 Amp control panel ‘blew’ causing some ‘excitement’ among the RD2 team. They worked hard overnight to make the repairs and a few adjustments inside the rig itself. 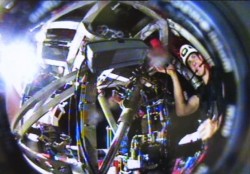 ‪#Bluemining‬‬‬‬‪ RD2 team member Joe Hothersall working inside the RD2 drilling rig while its on deck during the night, viewed from one of RD2’s cameras, looking down (photo B. J. Murton @bramatsea)‬.‬‬

‪While RD2 was back on deck we collected a couple of gravity cores from top of the ore deposit. The gravity corer is essentially a 60kg lead weight with a 3m long steel pipe. The concept hasn’t changes for decades and, in fact, some of the first deep-sea sediment samples were collected over 150 years ago during the HMS Challenger expedition using a lead weight (called a ‘plumb bob’) with some tallow (animal fat) attached to the end to stick to the sediment. 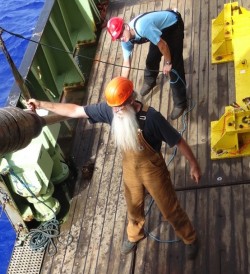 Our chief coring technician, Richie Phipps, is a wizard at gravity coring and after a spell on deck, his aprentice, Will, quickly learnt a few tricks (photo: Gavin Haughton, #Bluemining)

With the first cores on deck, after such a long wait, Adeline was very keen to start sampling. Pore water was extracted first, and then the cores split for description. It is evident that, as predicted, the upper few metres at least of the hydrothermally extinct ore deposit is oxidised and the sulphide has turned to a thick red ‘rust’. Archeologists think that ancient prehistoric tribes highly valued this type of rock, and used it to decorate themselves with. Little has changed between those neolithic people and modern day PhD students!

This is what Adeline says about the coring:
“The night before starting the DASI survey has been productive with two gravity coring stations done on the western flank and the top of ‘Southern Mound’. Together with megacores and box coring, their purpose is to collect hydrothermal sediments for: (1) the Blue Mining WP1 conducted by the University of Lisbon (rapid, exploration-oriented mineralogical and geochemical study of cover rocks to sub-seafloor to vector to concealed sulphide mineralization), and (2) Blue Mining WP2 lead by the National Oceanography Centre (Southampton) for assessing the resource potential of extinct massive sulphides – eSMS- deposits). My part is to study the mobilisation of metals during ore alteration processes (supergene processes) from the surface to depth within the weathered eSMS deposits. An additional purpose of these cores was a geotechnical test of the seafloor for the potential landing sites for the RD2 deep seafloor drilling rig. 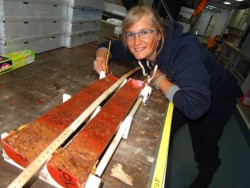 Concerning the procedure, after recovery, the cores are quickly transported to the “cold lab” with a temperature of only a few degrees Celsius, to meet the same environment than at 3500 meters depth. This is to preserve the core by minimising any further reactions and biological activity. Moreover, the pore water is extracted under a nitrogen atmosphere in a huge polythene tent (called a glove bag) to avoid any further oxidation.

Ritchie ‘the coring wizard’ and his apprentices, Will, with Florian, Kate, Sofia and Adeline extracting the 1.30 meter core out of the corer, in its bloody red puddle of iron-rich water. Make sure to wear clothes you don’t need anymore! (photo: Gavin Haugton #Bluemining)

Once enough pore water has been extracted, the cores are finally split, revealing the internal structures of sediments which are described and sub-sampled. The cores are an accumulation of clays, metallic oxides, some (hopefully) sulphides grains and possibly pelagic carbonate ooze sediment, the thickness of which varies according to our distance from the mounds and the time since the hydrothermal activity died. Our first core, undoubtedly of hydrothermal origin (with Mn and Fe oxides from millimetres fragments up to centimetres fragments!) showed several layers of different colours from orange to brown  to crimson red, etc., interpreted as geochemical zones marking a possible change in redox conditions”.

After coring we moved to start the DASI survey. With all the ocean bottom electromagnetic instruments deployed, we used our acoustic telemetry to activate them on the seafloor. The next 72 hours were focused on getting the DASI high-voltage transmitter as close to the seafloor as possible, while avoiding crashing the 500m long streamer that is towed along behind DASI. At 2km behind the ship, in 3500m water and only 50-100m above the seafloor, the DASI team and ship’s officers concentrated hard on keeping the deep-towed array on the survey line and with no more than a few tens of metres or error. The new Sonardyne acoustic navigation beacons we tested on the way out from Southampton in June are working well, despite the depth and distance, and allow us to track DASI and its tail to within a few metres in both position and depth. Never-the-less, its takes a lot of concentration to read all the screens and calculate ahead what speed we need to haul in or veer out the cable. 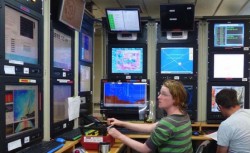 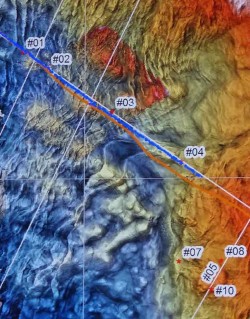 Live feed of the navigation map for the DASI array. The orange line is the ship track, and the blue line is the DASI track. The red stars are the OBEM locations, and the ore body targets are 150-200m in diametre. Map colours represent depth (3600 to 2500m) (photo B. J. Murton @bramatsea)‬

The DASI survey will last three days during which we have a chance to get some rest and go over the HyBIS dive videos to make a geological map of the extinct hydrothermal mound. After DASI is back, we are going in again with HyBIS to place new LED beacons and recover the used ones (we don’t leave litter on the seabed). Then its RD2 time again, with a more promising site on top of the mound where we have seen bacterial mats. Watch this space for updates or follow us on twitter #Bluemining @Bramatsea.