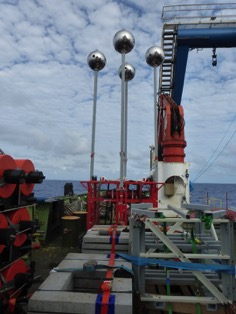 We’ve now just passed the middle of the JC138 cruise (#Bluemining) with a total of 14 days left out of our 31 science days! We’ve managed to get data from a range of the equipment on board. It seems that some of the testing that was done on the transit to Ponta Delgada was worthwhile, DASI was successfully running for the predicted total of 72 hours straight which resulted in some rather tired geophysicists but a lot of data that now needs to be processed. This was followed by another long shift for the geophysicists, when “Sputnik”, GEOMAR’s 3D electromagnetic transmitter, was also deployed over roughly 24 hours. 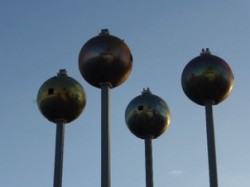 Sputnik transmits electromagnetic waves in 2 directions and was deployed on the seafloor to take measurements at various points over the MIR mound. The seawater has had a bit of an effect on it’s ‘nice shiny balls’ as described by our principal science officer (@Bramatsea), turning them from the silver to an iridescent purply gold.

Relatively regular deployments of the RD2 drilling rig, admittedly with mixed results, have been spaced with sediment coring and a interesting HyBIS dives. When HyBIS first returned to our first target site, Southern Mound,
we were able to explore further around the target, picked up two of our three flashing beacons, which had run out of battery, deployed two new beacons on two very promising drilling sites, and collected three more large rock samples to finish a rather successful dive.

HyBIS’ manipulator arm collecting the first grab sample, it was nearly too big to fit in the claw 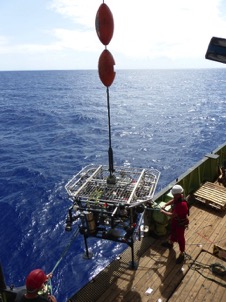 Our first alternate drilling target site proved to be as good as it looked during the HyBIS dive and we were able to land the RD2 on the surface with less than 10° slope, and were able to start drilling. Unfortunately the rig encountered another fault that caused us to terminate the hole early, but we were able to bring up our first couple of meters of RD2 core including a very hard layer of jasper. We have resorted to a diamond impregnated bit and are drilling again deeper into the mineral deposits. 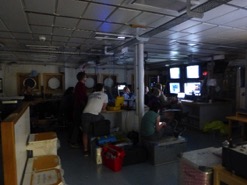 An underwater hyperspectral imager, a device that measures the spectral reflectivity of the seafloor, was attached to HyBIS for our third dive. Images processed by human eye are made up of 3 different wavelengths of light, red, green and blue (hence RGB colour), however this spectrometer can ‘see’ over 200 wavelengths! The idea is that, based upon these spectra, we can identify the different materials such as the chalky sediment, basalt and sulphides. We attached the device to a specially made module for HyBIS and started the dive in the southern part of the mapping area.

We then moved west over a distance of 1.6 km, over a frozen ‘lava lake’, discovered on the high resolution bathymetry obtained on the sister cruise M127 (#Bluemining), ending up at the natural wonder that is the active hydrothermal TAG mound with its spectacular black smoker complex. Despite the dive finishing in the early hours of the morning, quite a few people stayed awake so they could catch a glimpse of the black smokers. We even managed to find two drill-string re-entry funnels, installed during the 1994 ODP (Ocean Drilling Projects) Leg 158. The funnels were installed to help the drill string re-enter each hole during the drilling process. 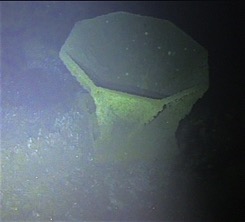 At the mid-cruise, we had a welcome break by holding a BBQ party on the Sunday evening. Despite the 2-can rule for our beer allowance, the galley staff produced a fantastic spread and music was provided by our resident sailor, DJ Jarrad. Laurence dressed up as a cow called DASI to celebrate the completion of the DASI EM experiment. 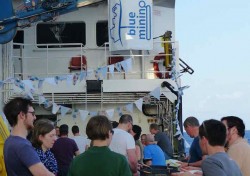