HyBIS ROV image of the dead hydrothermal deposits cut through by a fault scarp. The vivd colours are the result of oxidation of the copper and iron sulphide minerals. What is lacking are any hydrothermal vent animals that are so characteristic of the active hydrothermal vents. In fact, we see very few animals on the seafloor here, the most common being a fish that followed us around for a few hours.

The past two weeks have seen some excellent dives by the ROV HyBIS, assessing exploration targets identified by the previous Blue Mining cruise M127. HyBIS was able to sample across several mounds that proved to be eSMS deposits not previously known. The most significant of these we named the Rona Mound after the late Prof Peter Rona who, for many years, was a staunch advocate of drilling the extinct sulphide deposits in the TAG area. HyBIS was able to deploy the experimental hyperspectral scanner for the first time over deep-sea sulphide deposits and the data look very promising.

A fishy friend that followed HyBIS and kept staring up at our high-definition camera. We must have looked like Cyclops!

Some of the sulphide mounds have been cut in two by faults and slumps that expose deep sections within the mounds. From this we are able to build up a geological model of the deposits that contrasts with the traditional version. At the top, we find old and oxidized hydrothermal chimneys, much like those reported before. Beneath these we find up to 3m of thick red oxide sediments that are either weathered sulphide and/or iron precipitates from the cooling vent fluids during the last stage of hydrothermal activity. Beneath the sediments we commonly see a 10-30cm thick layer of jasper – where the red oxide sediment has been cemented and recrystallised by silica (quartz). The result is an incredibly hard material, like ceramic, that has proved difficult to drill through. Beneath this, the sulphides form a rubble and breccia that rapidly increases in strength where it is cemented by more mineralization. This is the core of the mound. What is new is the discovery that we see volcanic lava flows that have erupted at the same time as the mounds have developed, sometimes with sulphide and lava inter-layered. This is a new discovery and requires a revised model for these deposits.

Sampling ‘Party’, everyone places their stickers on the rocks they want

HyBIS was able to take many samples using its manipulator arm and these were stowed in a closed drawer on the ROV. This keeps the samples safe – especially usefull on the rare occasions such as the end of the last dive when HyBIS fell off a cliff and landed upside down! 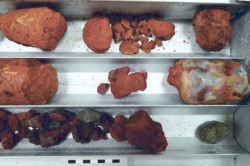 First core – the killer jasper that proves so hard to drill though.

Some of our samples weigh over 10kg and we have proven the ability of the new HyBIS vehicle concept as a low-cost, effective surveyor and sampler. The samples have been described and logged by the geoteam, and cut by Berit using our diamond saw. Berit says that the jasper was especially hard and blunted one of her brand-new diamond-edged saw blades, which made her a bit grumpy. At the end of the cutting, we have sampling parties, where the geoteam get together and stake a claim on each piece. This works well, although sometimes the same sample is claimed by more than one person, meaning either Berit cuts it again, or we have to share the same sample. All of the geoteam’s work is well integrated with each person responsible for a separate part of the mineralisation study from the early formation of the sulphide, to the later dissolution and re-growth history, to supergene alteration and weathering, and to metal mobility through the sediments.

Our star attraction (i.e the most expensive) is the robot drill RD2. For the fist half of the cruise, RD2 misbehaved and we had many technical issues. These were frustrating for everyone, including the drill crew, who worked hard through the days and nights making repairs.

(Left) RD2 changes a drill pipe while in the background one of the flashing beacons, placed by the HyBIS ROV, marks the landing site. (Right) the ‘breakout plate’ where the drill is seen rotating at 350 rpm and heavy sulphide cuttings are accumulating on the seafloor with minimal plume disturbance.

We eventually drilled a few holes but the jasper layer proved very difficult to get beyond. Eventually, we moved to a new site, the Rona Mound, and after surveying it with HyBIS and placing a new LED beacon, we were able to land the RD2 first time and start drilling.

As I write, the drill has reached over 10 metres below seafloor and is still going strong. There is a growing mound of drill cutting visible in the video images and these are black and sparkling – just what we want.

Following the mid-cruise party and BBQ, the DASI team started packing away. They were very happy and made a lot of noise banging boxes shut, humming and singing loudly in the sure knowledge that they had their data “in the can”. Meanwhile, the Sputnik team were chasing a short circuit and trying (badly) not to cut their fingers while trimming cables……. They have eventually found the fault, a leaking underwater connection, and are ready for another survey.

Laurence North (left), from the DASI team, demonstrates the importance of wearing the correct form of personal protective clothing to Kate (centre), Romina (centre right) and Will (far right)

While surveying the seafloor with the HyBIS ROV, we have come across a number of odd things. The first was a 2m tall pipe sticking vertically out of the seafloor. A quick call was made to the RD2 control van and an embarrassed Mike Wilson checked the RD2 on deck to find he was missing one drill pipe. It seems it fell off when recovering the drill. The pipe must have been travelling at over 100km per hour when it hit the bottom! Another curious object was spotted at the base of the Rona mound. At first, from a distance, it was a curiously elongated shape, dark black, with two short tentacles floating up from it. I thought it was a new type of sea creature hitherto unknown to science, but as we got closer it revealed itself as a (UK) size 10 boot (left foot only), complete with boot laces, lost by some long passed sailor. Other objects we recognised: an anchor frame from last months OBS deployments and one of our live OBEM’s complete with its mooring floats and release mechanism on the seafloor at 3500m.

With 10 days of science to go, everyone’s spirits are high, and no more so that Berit who can be heard singing and laughing above the screech of her rock saw as she slices up our collection of samples.