Our past few days have been a mixture of great excitement, hope and loss. As the British saying goes, “worse things happen at sea”, and there is no doubt that we are definitely at sea. In fact, some of us are well into their 3rd month on Blue Mining ‘cruises’, at 26°N Mid-Atlantic Ridge. Sven (Geomar, and leader of work package 1), Iain and Adeline (both NOC students), Sophia (Uni Lisbon) and Florian (our advisor from IFREMER) were on cruise M127 that left in May and June, and then joined cruise JC138 in early July.

The 10m coil loop that forms the metal detector for the Martemis system being launched off the aft deck of the RRS James Cook. Note the rather pleasant and welcome sea state here in the central Atlantic

The term ‘cruise’ is a rather unfortunate one as it gives the impression that we are sitting around, sipping cocktails by a swimming pool, being waited on hand and foot, and generally enjoying a life of leisure. How far removed from the truth. Our French colleagues call scientific cruises ‘campaigns’, which is a much better term. Perhaps ‘expedition’ or ‘mission’, or some other word that summons up connotations that are more in line with the heroic efforts that our ‘cruises’ seem to always inevitably entail. Never-the-less, here we are, approaching the last few days of science on our Blue Mining cruise JC138 on the good ship RRS James Cook who’s tenth anniversary is this month.

The main logging frame that hangs12m above the coil loop and which contains the altimeter, logging, power modules and the USBL sub-sea navigation beacon for the Martemis system, following the coil loop as it is launched off the aft deck of the RRS James Cook by Martin (right) and ‘Big Stevie’ (left)

The ‘Detectorists’
We have not been idle. The Sputnik team (with a little help from the DASI crew) assembled and launched their 10m square metal detector and surveyed both the MIR zone and the central area of extinct massive sulphide mounds that include the ones we have been diving on with the HyBIS ROV and drilling with the robot drill RD2. The experimental metal detector is called Martemis, apparently after the Greek goddess (Artemis) and Martin Wallatz-Vogt, who spent a lot of time and effort building the instrument at Geomar (Martin, that is, not the goddess). Sebastian (our Sputnik team leader) explains that Atremis was the Geek goddess of chastity, virginity, the hunt, the moon and of the natural environment. So that explains everything….. 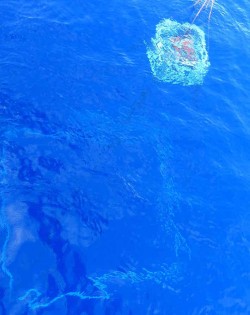 Martemis going under. For the more observant, you may notice the change in colour of the logging frame from red to grey. There is a story behind that change which we British would describe as ‘interesting’. Enough said!

The surveys were hampered at first by a loss of both the sub-sea navigation and the instrument’s altimeter data. The former was a result of the ship using its powerful thruster to keep a slow but precise course at the expense of acoustic quiet, while the altimeter got a very clear echo from the 10m loop suspended 12m below the main logging frame.

Near the seafloor, the swell heaved the ship up and down rather rapidly a few times and the logging frame tangled slightly in one of its suspension rope and tilted at 20° to one side. This accident proved fortunate as the altimeter, now looking obliquely sideways, locked on to the seafloor instead of the coil loop, and that solved the first problem. The second bit of luck came as we discovered a way to boost the signal on the ships acoustic navigation transceiver and we were able to get the location of Martemis. The surveys then proceeded as planned and on time.

Lost
The trouble with being in the middle of the Atlantic Ocean is that it is a very large place and we are very small. A reminder of just how big it is, and how small we are, came last night when we released an Ocean Bottom Electromagnetic Instrument (OBEM) from the seafloor 3600m below us, and then promptly lost it. How did this happen? The story is simple: we sent an acoustic command to the OBEM, it replied that it had dropped its anchor weight and was ascending. It came to the surface and sent us a radio signal, but its flashing light had failed. Darkness was approaching fast and we spent the next four hours searching in vain. The whole sorry episode served to remind all of us how remote we are, how fickle even the most basic technology can be, and what little chance anyone would have if they fell overboard.

All hand on the fo’castle as we scour the darkness, under a moonless sky, well into the night for a glimmer of light from the lost OBEM (Berit left, Iain centre, and Gavin right)

Found
Old fisher folk will tell you that ‘what the sea takes away, she eventually gives back’. While you may think that this only applies to things that float, it also applies to the things that sink. Beneath the sea the things may be ‘out of sight’ for most of us, but its not gone. Hence we have a strict policy of never ever discarding anything over the side apart from food waste (to feed the fish) and only when we are far from shore. Despite this, we sometime have mishaps. As reported in last week’s blog, for us, it was the empty core barrel accidently dropped from RD2. For someone else, it was a right-footed boot. Its really amazing to find such tiny objects on the vastness of the seafloor. Assuming a random distribution and the tiny area we have explored, there must be billions of boots on the deep ocean floor…….

No foot-prints, so we deduce it was lost over the side by a sailor in earlier times

Drilling
Our early technical trials and tribulations with RD2 are behind us as the robot drill coring deep in to the mineral deposits. We have focused on the newly discovered (Blue Mining) sulphide mound we have called Rona Mound (after the late Peter Rona who spend many years studying the TAG area). The drill has bored three holes in to the mound, each getting deeper. The current hole will be the last, and we aim to log it (with our down-hole logging tools) and then cap it with a ‘packer’ or cork. The cap will allow the fluids and microbes in the hole to re-equilibrate and enable us to revisit to sample the fluids through a titanium pipe and valve with a submarine or ROV during future ‘cruises’. 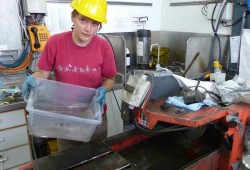 Sawing
Once again, Berit is busy at her diamond saw, cutting the rocks ready for describing, sub-sampling and on board analysis. We have two XRF’s on board, and they give us an indication of the composition of the rocks and sediments. With 4 days of science to go, we are pushing very hard to get another site surveyed by our HyBIS ROV, to drop an new LED beacon and drill our first hole into the MIR mound. If all goes to plan, we are able do it. Watch this space.

RD2 core barrel accidently dropped from 3000m to the seafloor would have been travelling at over 100km/h when it impacted. No chance for our HyBIS ROV to pull it free. 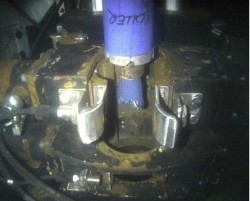 Deploying the ‘block-buster’, a rotary drill bit to bore an open hole, down to the depth we stopped at last time, before commencing coring again. Also in shot is the G10 diamond impregnated drill bit – the previous diamond-set bits wore out after only 10m!

Hole in one: the RD2 adds another drill rod to the drill string with a clear view straight down into the borehole (right)

RD2 in action: drilling the Rona Mound at 3530 m below sea level. Note the minimal amount of cuttings or plume despite pumping 70L a minute into the borehole. The sulphide is very dense and settles very (possibly too) quickly. 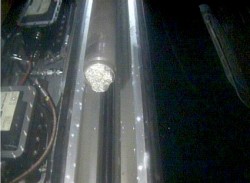 End of a core run; RD2 pulls a core barrel and looks at the core catcher. The glittering gold-coloured rock is massive sulphide (iron and copper) from deep within the mound. We carry 36 core barrels in one mission, each is 1.7m long. We also have three bottom hole assemblies (BHA’s) each with a different drill bit, plus the down-hole logging tool and a borehole packer.

On deck, the robot drill RD2 hands over the core barrels to the drilling crew.

Kate, with a bucket of water from the core barrels – the microbial biologists wanted 2 litres…….sorry folks 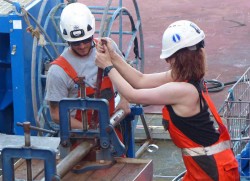 Sally (right) puts her back into it as she wields a large wrench to break out a core liner from its barrel, with a little help from Garry (left)

Anything inside? Recovery is not always 100%…..

An excited crowd gathers on the core deck as the sparkling massive sulphide is extracted from the core barrel. Sorry folks, it’s called fools gold for a reason…..