We are finally on our way home. It’s a nine-day haul back to Falmouth, Cornwall, and the team are in good spirits.

We have electrified the seafloor from every angle using our geophysical instruments, made some amazing dives with our little robotic sub HyBIS, and collected sediment cores from patches of thick metalliferous mud. Our final geophysics survey involved running the large (10m diameter) metal detector (Martemis) over the seabed, some 3500m below us. The popular but quirky British comedy show called ‘Detectorists’ springs to mind – as the sputnik team struck a remarkable similarity to the main characters (see below) specially at the end of their long shift. 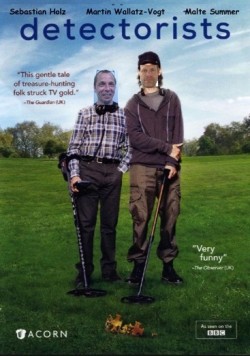 The ‘Detectorists’ poster adapted from ACORN productions Ltd., without permission.

HyBIS fitted with a special payload delivery module adapted to carry the UHI instrument to the seafloor and make the sweeping scans.

The HD video images from our ROV ‘HyBIS’ are astonishing. Barren-looking landscapes of pale grey-coloured puffy sediment covered seafloor rolling away like gently billowing folds on a fresh white duvet, the light going eerily dark-blue into the far distance. This soft landscape is then scarred by deep blood-red slashes as earthquakes have thrust up cliffs of crimson oxidized minerals that, as we draw closer, reveal stripes of daffodil yellow, marigold orange and fluorescent green. Some of these cliffs are 20m tall, where the conical mounds forming the mineral deposits have been rent apart by earthquakes exposing rocks deep within their interior. In several places, despite the mounds being over a hundred thousand years old, the light from our sub shimmers as it passes though warm waters seeping up from deep below. Elsewhere, at 3500m on the seafloor, the seawater temperature is 2°C.

Earthquakes have dissected some of the eSMS mounds exposing their structure deep-within their interior and causing large volume plumes of metal-rich sediment to flow out across the seafloor for many hundreds of metres.

HyBIS view of the seafloor. With 72% of its solid surface as deep-ocean floor, planet Earth is the darkest planet in the Solar System

Our main challenge has been to get our robotic drill , RD2, to land on small ledges where it is flat enough to drill a hole. The mineral deposits we are aiming for are very rugged and down to 3600m below sealevel. To aide us, I had some flashing LED lights built by Keene Marine Ltd. (a local company on the Isle of Weight) to act as beacons. Using our little ROV to deploy the beacon, we find a flat spot, usually only 10m across, that is large enough to land our drill. The beacons are battery-powered and placed inside a small beer-can-sized clear plastic jar full of cooking oil so they can survive the water pressure. Up to four of these are then loaded into a launcher on the HyBIS ROV, and each is held in place with a pin. A magnetic strip inside the launcher acts on a magnetic switch in each of the beacons to keep them switched off until launched. Once on a flat bit of seafloor, the ROV pulls the pin out with its robotic arm and claw, and the beacon drops on to the seafloor with a small puff of dust. The batteries last 5 days and emit a brilliant flash of blue and white light every second that is visible over 150m away. After recovering the ROV to the ship, we then lower our ten ton drilling rig to within 100m of the seafloor, locate the beacon, and MOVE the ship in steps of between 5 and 10 metres until we are directly over the beacon before landing. If the slope of the seafloor is more than 10 degrees, we have to pick the drill up, move 5 metres and land again. We repeat this until the landing site is flat enough. The rig is 5m tall and 3m wide and, despite having extendable legs, is rather sensitive to anything other than flat level seafloor that is also devoid of thick sediment. This operation proves that the RRS James Cook is a highly capable vessel, with its powerful dynamic positioning able to move and hold station to within a metre for several days continuously. This has a material affect on our ability to deploy the drill and is a pre-requisite for any advanced studies of these eSMS mounds.

In my last blog-post, I said we hoped to drill at the MIR eSMS. Our plan was to survey drilling sites with HyBIS, deploy beacons and then land the RD2 drilling rig. However, at the last minute, the HyBIS dive was diverted to a rescue mission for two OBEM’s that were stuck on the seafloor. With only an approximate area to search in, we modified HyBIS to carry a large shackle and hook attached to the main lifting point on the ROV. The HyBIS ROV is rather unique in that it can lift 800kg: it may be small, but it is strong! The OBEM’s, with their anchor attached, weigh ~120kg in water and about double that in air.

We were very lucky with the first OBEM, finding it within a few minutes and rescuing it to the surface. The second one proved more allusive and it wasn’t until the end of the UHI survey that we found it – a long way off its reported landing position. Both OBEM’s were recovered during the night, not a bad job considering they were at a depth of 3600m.  Interestingly, Alexander, as part of our Blue Mining Risk Assessment, highlighted failure of the OBEM’s to release and a contingency was put in place.

Thanks to Dave (left) and Russ (right) for modifying HyBIS and piloting the HyBIS ROV with skill and dexterity.

HyBIS carries the latch-hook and shackle in its manipulator arm. The strop is attached to a load bearing cross-member beneath the hydraulic sample drawer.

“Gotcha!” video frame from HyBIS as she goes for the rope and float attached to an OBEM that had become stuck on the seafloor at 3600m.

Rescue complete. HyBIS returns the second of the lost OBEM’s to the surface where Russ (left), Will and Gerard (right) land it back on deck – a long but successful night.

During one of the surveys, we came across a remarkable sight, several small spherical white objects that appeared to have landed from above onto the seafloor and rolled down hill. On closer inspection, we became convinced that these are golf balls. Anyone being T-ing off recently? We have our suspicions that, if proved correct, place a time line on arrival of the golf balls as of September 1994.

An unknow species of hard-shelled, white, spherical creature? More likely, golf balls (circa 1994). We found lots, plus 2 boots, a cognac bottle and some tin cans. We have added: two drill strings, a core barrel and several OBEM concrete anchor blocks. The latter could act as colonsation experiment.

After the OBEM rescue, time was running out so we decided to drill the MIR site blind, with no site survey or beacons. Risky, but it was our only and last chance of drilling the extinct deposit. Few people have seen the MIR mound – the first being our Russian colleagues (hence the name ‘MIR’ – meaning ‘peace’ and named after their MIR submersibles) and the second being our friend and colleague, the late Peter Rona and our very own co-chief scientist, Sven Petersen during an Alvin submersible dive. The MIR deposit is the largest in the TAG area and poses interesting questions about its mode of formation and preservation.

We struck lucky in that we landed first time on a gentle slope of 4° in thin sediment and on firm ground. Drilling started right away and the hole reached 12 metres. As before, we encountered hard layers and sulphides. With time running out, the hole was abandoned after attempting to place the last packer. 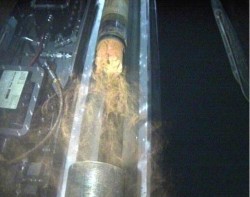 Hard layers in core protrude from the end of one of the RD2 core barrels, MIR site 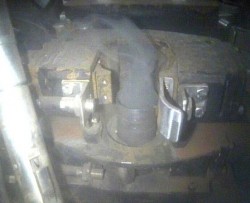 Is this evidence that we have reactivated fluid flow at the MIR site? 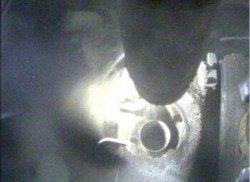 RD2 attempts to place a packer in to the drill hole at the MIR site. 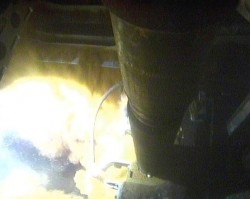 Lift off: RD2 leaves the seafloor at the TAG area of the Mid-Atlantic Ridge for the last time during this mission.

Now we are starting  out on our nine day journey home to Falmouth in Cornwall, everyone relaxes a little. Still the cruise report to finish, and things to tidy up. Keeping busy,  Iain photographs the last of our cores samples, Sophia does the last of her chemical analyses, and Berit puts away core trays and samples into cold storage.

Flash setup: Iain photographs the last of the core.

Sophia can’t be kept away from her lab.

Berit packs the core trays away

With the drilling over, the RD2 team go AWOL and we have a ‘Homeward Bound” BBQ and special award ceremony. Everyone gets an award for their outstanding services, what ever they were! As it’s his first-time at sea, Co-chief Paul Lusty gets a special award for optimism. 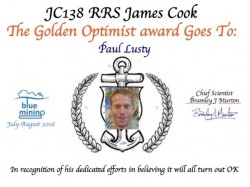 That’s it folks. Thanks for following our expedition to drill beneath the Mid-Atlantic Ridge.

We got there eventually