As part of the Blue Mining project MARIN has conducted model tests in their Concept Basin. Aim of the model test was to determine hydrodynamic loads on typical riser sections and a pumping station (see Figure ).
This is achieved by three different tests:
1 tow tests to determine drag loads,
2 oscillations in still water, which is important for e.g. the estimation of the damping of vibrations and
3 towing with oscillations to determine the excitation levels of vibrations in the risers.

The resulting force coefficients will be used in computations that simulate the overall riser dynamics. 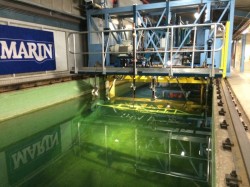