Testing self potential sensor on the Autonomous Underwater Vehicle (AUV)

Inactive sulfide deposits are believed to be bigger than the young, active deposits that are currently the main focus of exploration and could become an economically viable mining target in the near future. They are considered more interesting than deposits associated with active sites because
(1) they have reached their maximal size
(2) the specific and protected fauna living around active sites no longer exists and
(3) mining tools won’t be damaged by high temperatures.

Several methodologies exist to locate inactive sites using visual, geophysical or geochemical sensors, but they all request deep-sea exploration technology, such as autonomous underwater vehicles (AUVs). For the search for inactive deposits we prefer a set of geophysical properties since these deposits can partially be buried by sediments or lava making visual exploration difficult. The chosen method is a combination of magnetic measurements and a sensor measuring weak electrical currents produced by chemical reactions occurring between the sulphide deposit and seawater. We aim to measure these currents using a so-called self-potential (SP) sensor, a method already used on land and, as a towed instrument, at sea, but needs to be adapted for its use on small platforms. In order to increase exploration efficiency, we aim to mount the sensor to the frame of an AUV – in this case the German AUV Abyss (GEOMAR).

A first trial has been carried out in November 2014 at GEOMAR, Helmholtz Centre for Ocean Research Kiel, to test the feasibility of collecting SP data with electrodes mounted to the frame of the AUV. The AUV was submerged in a purpose-built pool to reproduce real conditions. Two electrodes are required to perform SP measurements and the longer the distance between the electrodes is, the more precise are the measurements and the better is the detection limit. We aimed at addressing the question of the influence of the electrical field of the AUV (motors, propellers, etc.) on the measurements to estimate the optimal position and configuration of the electrodes on the vehicle. The front electrode was positioned on an outrigger near the nose of the vehicle, as this is the working position for the magnetometer during seafloor surveys. The back electrode was shifted to various positions along the AUV. Results indicate that, as expected, the data are clearly affected by the rotating fields generated by the propeller, but measurements capable of detecting sulphide deposit should be possible, if the back electrode is further than 1 m away from the propellers at the back of the AUV. This reduces the maximum distance between the electrodes to < 3m.

The AUV is currently at sea onboard the German research vessel R/V Sonne working in the Atlantic. During this cruise, working in difficult terrain showed that the outrigger places too much stress on the buoyancy foam and it appears that the initial plan of installing the SP sensor and data logger together with the magnetometer onto the outrigger needs to be redesigned. Work for the next 6 months. 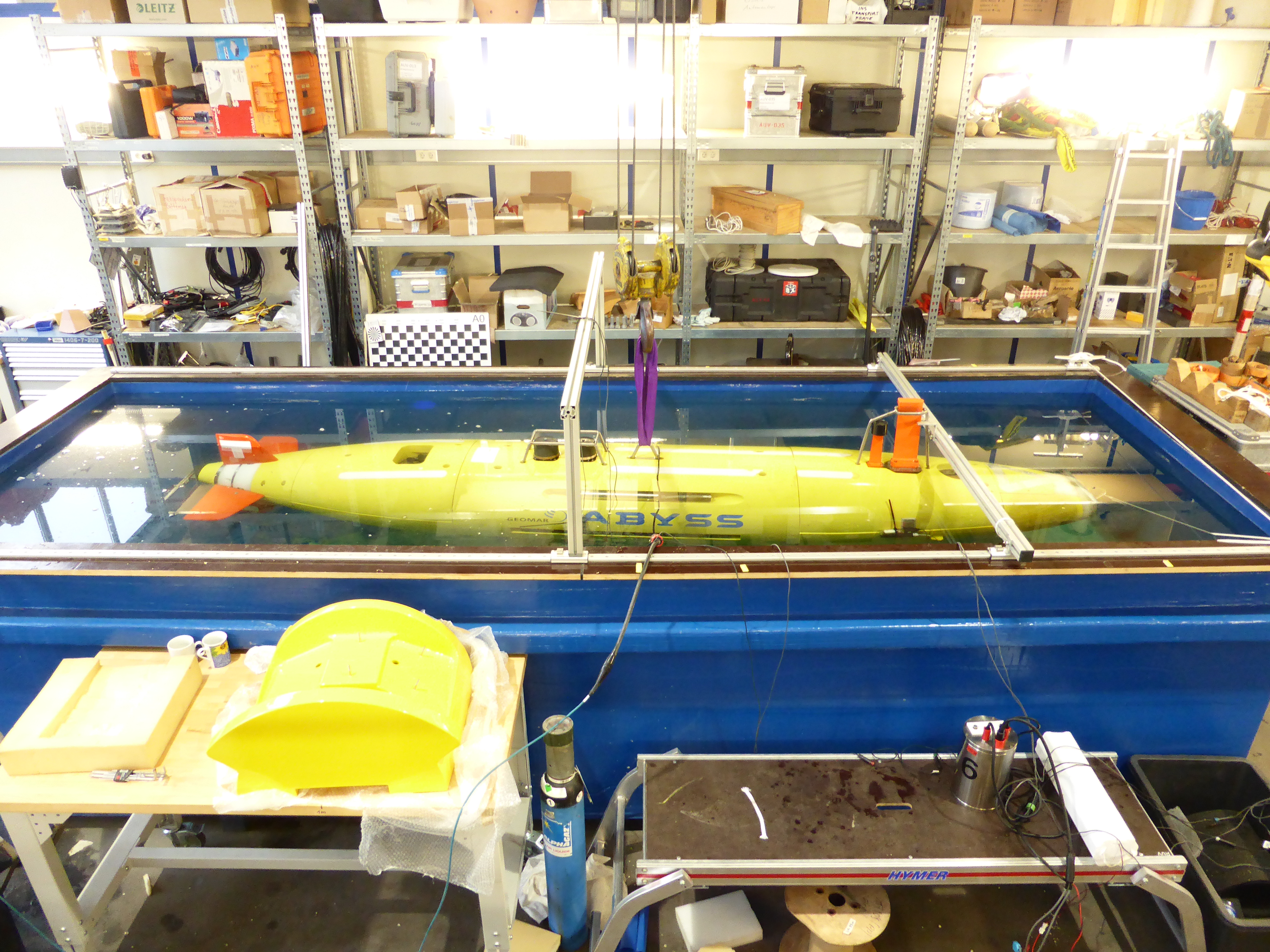 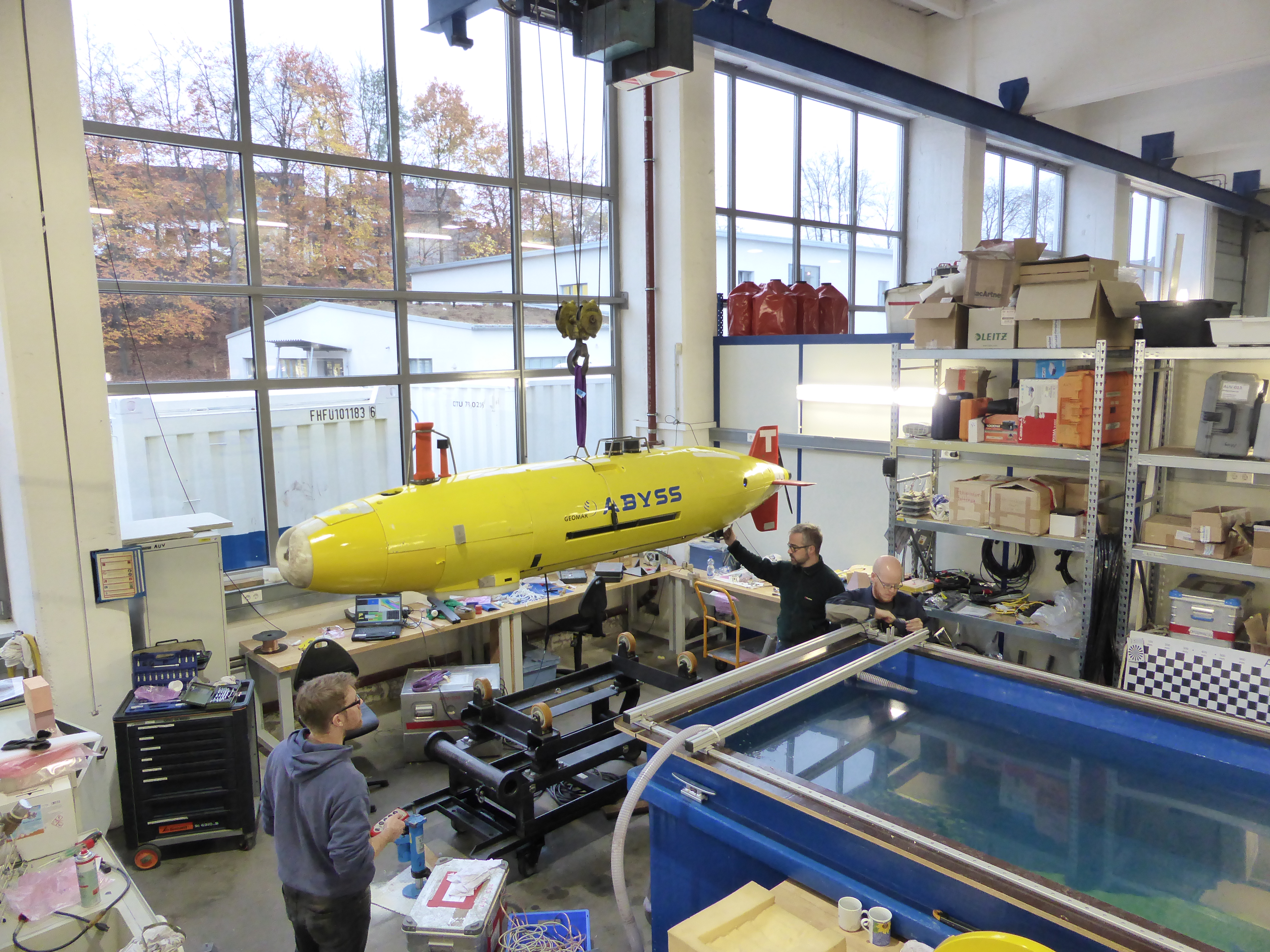